Read Quiz on Indian Constitution with Answers and get all the knowledge related to the constitution of India. These Quiz and GK are highly recommended for Students and those who preparing for competitive exams like SSC, IBPS, UPSC, GIC, LIC, Bank PO, SBI, Bank Clerk, NDA, CDS, SSC Tax Assistant, CPO, SSC CGL, Railways, SSC CHSL, School Quiz Competition, University Quiz & GK Test and many more.

1. Fundamental Rights of the Citizens are Justiciable or non-justiciable?

2. For how many years, The Chief Election Commission(CEC) of India holds the Office?


ANS – For a period of 6 Years or upto the age of 65 Years. Whichever is earlier.

3. In Which house the resolution to remove vice-president of India can be moved?

4. Which Act gave representation to Indians for the first time in the Legislature?

5. “As President, I have no eyes but constitutional eyes”, Who said this?

6. The Constituent Assembly signed the constitution of India on January 21, 1950. Which language was it written?

7. Who was the President of Constituent Assembly?

9. Which Parliament of India is called Lower House?

10. Rajyasabha is called as?

1. When the Constitutional status for the Panchayati raj and urban self- governing institutions was constituted, Who was the Prime Minister of India?

3. Who has the right to impose reasonable restrictions on the Fundamental Rights?

4. Who has the Authority to approve President Rule in a states of India?

5. According to Preamble of Indian Constitution, the ultimate power lies in the hands of whom?

6. Who becomes the chairman of Rajya Sabha?

7. If the Prime Minister of India belongs to the Upper House of Parliament, Can he/She vote in his/her favor in the event of no-confidence motion?


ANS – NO, If PM is a member of Rajya Sabha, He/She can’t vote in his/her favor if no-confidence motion takes place.

8. If the Speaker of the Lok Sabha wants to vacate the office before the expiry of his/her term, To Whom he/she needs to sends his resignation?

9. The first Amendment to the Indian Constitution was made to which Schedule of the constitution?

10. The Central Govt’s Portfolios are allocated to the Ministers by whom?

1. Planning commission is established by which resolution?

2. The Ordinance issued by Governor of a state is subject to approval by?

3.The Supreme Court of India Can accept the appeal against a high court judgement on what gound?


ANS – If There is sufficient Legal Jurisdiction in it

4. Which political party was first de-recognized and later on again recognized as a National Party by Election Commission of India ?

5. The Executive authority of India is vested by the constitution in whom?

6. The Estimate committee consists of how many members from Lok sabha?

7. Why the Constitution of India was promulgated on 26th January 1950?


ANS – Because this day was celebrated as Independence Day Since 1929.

8. What does the constitution of India describe India?

9. The word ‘socialist secular’ and ‘unity and integrity of the Nation’ were added to our Constitution by which amendment?

10. For how many years the Rajya Sabha MP are elected?

1 thought on “Quiz on Indian Constitution with Answers” 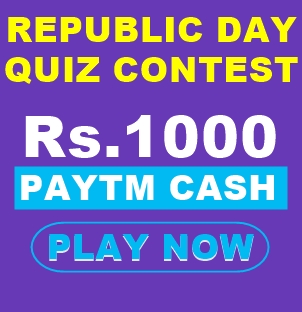